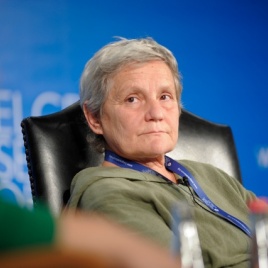 Sonja Lokar is a Slovenian freelance expert for gender equality. She is the Chair of the Gender Task Force, a South East European regional initiative, and president of the European Women´s Lobby. She is also a member of the European Commission experts’ network of women in political and economic decision-making, LP Westminster Foundation consultant and mediator in the OSCE Serbia and Kosovo Missions. Her background includes a number of tailored trainings, as well as mentoring and coaching programs regarding gender issues, civil society and capacity building of women activists and politicians. More recently, she has been an NDI consultant for Tunisian and Moroccan women activists from different political parties, as well as member of the NDI international observation mission of the first free elections in Tunisia, and has taken part in the process of establishing the “Women’s Academy for Africa”, in Maputo, Mozambique. Her expertise includes the creation and implementation of national and international projects on gender equality (in Slovenia and 32 different, mostly transition countries) for women members of left wing political parties, and women from all walks of life and all political backgrounds. She holds a degree in French Language and a degree in Sociology from Ljubljana University.

Ms Lokar was one of the lecturers of the first RAD seminar: "Security Sector Reform in the Western Balkans".