Vice president of the VMRO commission for European Integration 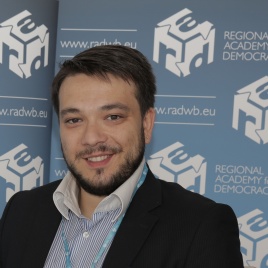 Mr. Zlatko Jankovski is Vice Head of a Sector in the General Secretariat of the Macedonian Government. Previously he was a staff member of the Deputy Prime Minister in charge for European affairs.

Jankovski is Vice President of the VMRO-DPMNE party committee on European Integration and a member of the committee for political systems. From 2009 until 2011 he was Vice President of the Youth Forces Union of VMRO-DPMNE. He is an alumnus of several different Foundations and Institutes - Konrad Adenauer Foundation, Robert Schumann Institute, The International Republican Institute, etc. He is an active member of the Pavel Shatev Institute in Macedonia. Jankovski studied political sciences at the Law school of the State University “St. Cyrilus and Metodius” in Skopje. He is currently an MA candidate in Media and Communications at the Department for Journalism at the same Law school.