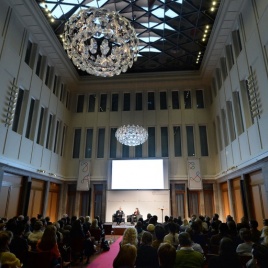 Within the program of the Regional Academy for Democracy, a group of participants will be able to visit Germany in the period of 1 to 5 November. This visit is organized and supported by one of the partners of the RAD – Robert Bosch Foundation, enabling 14 participants of the program to visit some of the most prominent political institutions in Germany and to discuss different topics with experts in different fields.

The participants will first have an introduction to the German political system and political culture by Steffen Hebestreit, deputy spokesperson of the executive committee of Socialist-democrat party (SPD). After that they will visit the Bundestag where Josip Juratović, Member of Parliament, will welcome them. The participants will also have the opportunity to have a guided tour through German Historical Museum, which will be followed with the dinner with journalists who are covering Western Balkans.

On the second day the participants will visit Federal Commission for the Records of the State Security Service of the former German Democratic Republic where they will be met by Roland Jahn who will take them through the famous Stasi Archives. In the Federal Foreign Office the participants will be able to hear where the Balkans stand in German foreign policy and at the headquarters of the Robert Bosch Foundation they will be given inputs on German-Southeast European trade relations and the impact of the financial crisis, transparency and efficiency in state administration and of course facts on Robert Bosch and the foundation that bears his name. Second day will be closed with the dinner with ambassadors of Western Balkan countries to Germany.

On the last day of the visit a conference with German experts and RAD alumni will be organized. Three RAD alumni – Florian Qehaja, Executive Director of Kosovar Center for Security Studies, Goran Selanec, Deputy Commissioner for Gender Equality of Croatia and Lana Prlić, Vice President of Social democratic Party of Bosnia and Herzegovina will discuss issues such as justice and security cooperation, human and minority rights and building of democratic institutions with their counterparts - Josef Janning from the European Council on Foreign Relations, Judy Dempsey from Carnegie Europe, Niklas Treutner from Liquid Democracy and Ursula Koch-Laugwitz from Friedrich-Ebert-Stiftung.